Great news! Th' Dudes postponed concert will now be on Saturday 5 December! If you already have tickets, you don't need to do anything, just bring your existing tickets to the show. If you don't have a ticket, get in quick as it's almost sold out - it's going to be epic! Purchase tickets here.

The newest inductees to the New Zealand Music Hall of Fame were due to hit the road for the first time in more than a decade in April, Th' Dudes first tour without founding member Ian Morris, with Ian’s brother Rikki on guitars and backing vocals for the tour.

Originally formed as a high school band Krispie in 1975 and disbanding in 1980, Th’ Dudes had an incredible impact on the New Zealand music scene, with hits like ‘Be Mine Tonight’, ‘Bliss’, ‘That Look In Your Eye’, ‘Right First Time’ and ‘Walking in Light’. They won Top Group and Single of the Year for ‘Be Mine Tonight’ at the 1979 New Zealand Music Awards and stopped playing live in 1980, ahead of the release of their second album Where Are The Boys.

Since then, Th’ Dudes have only reunited for a tour in 2006 that saw 11 shows expanded to 17 due to the incredible demand for tickets, and visits to favourite holiday spots the following summer. Th’ Bliss Tour is the first chance to see Th’ Dudes live in concert in 13 years, for shows promising high energy entertainment and all the hits. 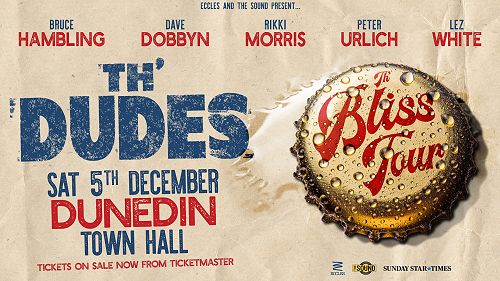