Our guest reviewer last month was Alison Sammes. Alison summed the evening up as one of imagination and intensity, read on to hear her experience.

A mild and still winter Wednesday night set the scene for the audience filling Dunedin’s town hall to sit awestruck for one hour and twenty minutes while the NZSO led us on an emotive journey through a winter wonderland.

Starting with ethereal strings heralding Christopher Blakes’ Angel at Ahipara holding her vigil, the conductor, Fawzi Haimor, lead the string orchestra masterfully, bringing depth of feeling to Blake’s work. There was a feeling that the peace and rage which are felt at a gravesite was being mirrored by the melodic being torn at by waves of the discordant. The story is told in seven parts, with undulating sound pulling at the audience and dragging them into the setting until you can almost see the mist rising towards the heavens.

For the next piece the entrance of violinist Carolin Widmann is met with thunderous applause, and for those that have not seen her play before the reason will become clear shortly. Backed by the full NZSO Carolin doesn’t merely play but truly performs, turning Stravinsky’s Violin Concerto in D Major into a visual spectacle of intensity and passion. This is further emphasised when the lights from the town hall bounce off the flutes and brass section like icicles sparkling in the moonlight.

After a brief intermission we have the pleasure of being treated to Tchaikovsky’s Symphony No 1 in G Minor (known as Winter Daydreams). If you close your eyes and let the story take you away it is easy to imagine yourself watching snow fall outside while you’re beside a warm fire or huddled under a blanket on an open carriage trying to beat a winter storm.

Although the crowd tended towards an older generation, the younger members of the audience showed their obvious enjoyment of the final act as the cymbals crashed in Tchaikovsky’s Winter Daydreams.

The overall experience of the evening was one of imagination and intensity, perhaps not an ideal set for a first venture to the orchestra, it provided a stunning evening for those who enjoy orchestral music. 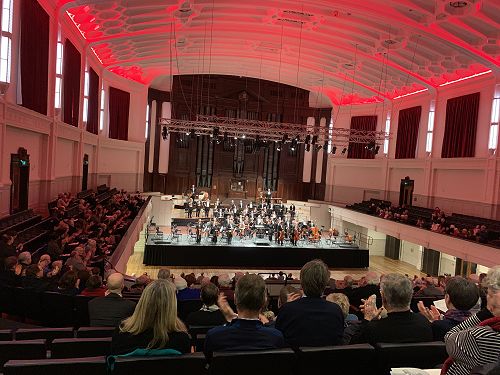