Our guest reviewer last month was Abi Charters. Abi enjoyed an evening at the New Zealand Symphony Orchestra, read on to hear about her experience.

Tonight the NZSO treated us to a performance called Enigma. They were directed by Edo de Waart and accompanied the talented South Korean pianist Joyce Yang. They presented us with some fine pieces of music composed to represent the late Romantic era. The venue was the perfect location that complemented the music by demonstrating how the acoustics play a major role in a successful performance. It was obvious that those who did attend thoroughly enjoyed themselves.

The performance tonight made me truly appreciate how complicated it is to create a masterpiece that we listen to on a CD or on the radio. It showed the true complexity of what and who is involved to make these wonderful pieces of music. Looking at how many people were on the stage gave me a new appreciation of all the time and effort that was needed to play a piece of music so perfectly. It brought back memories of the hours I put in when playing in the school orchestra.

The very first notes that were played produced such a perfect sound, it gave us goosebumps. It was quite spectacular watching Edo de Waart bring the entire NZSO through the complex pieces of music with perfect timing and ever-changing tempo. When it came to Joyce Yang joining them on stage, she showed passion and true commitment for music. Her passion was not just through the music, but physically you could see she was living through every note. She played so passionately at one point, she broke a string on the piano mid-song. When this happened, the orchestra stopped and waited while she was ripping out the loose string with her bare hands, then carried on as if there were no pause in the music. Now this was commitment!

During the performance, I watched the musicians in each section. As I looked throughout the different sections, it was very clear that they were too feeling the music. I could see smiles and movement of their bodies as they too were taken on a physical journey through the pieces. This most definitely influenced how the audience received the music. When the night drew to an end, the audience showed their appreciation by the applause that didn't end for a very lengthy time.

Overall this was a very enjoyable night. This is something that we will have on the calendar to attend in the future. Dunedin can learn a lot from events like this. It will help encourage the younger generations to keep the passion alive with live classical music. NZSO, Joyce Yang and Edo de Waart should feel proud with what they have managed to achieve. Time, effort and passion have really paid off! 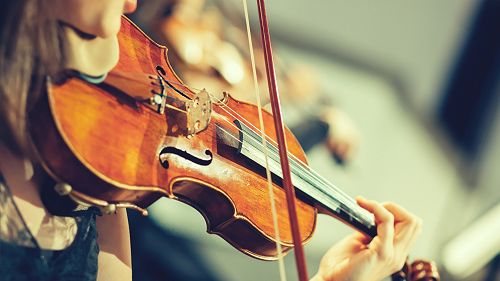